Are LED Streetlights Actually Taking Over The Market? 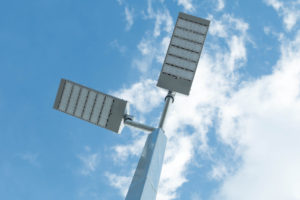 As a company, Can-Traffic Services has been installing LED streetlights since their inception. When LED technology first entered the scene, we immediately set up LED test pilots on our own property. We did this to measure various throws, intensities and other spectral dynamics specific to individual luminaires. Information such as this helps us better advice our clients on the best choices they can make to account for individual lighting needs or requirements. We service, supply and maintain all manner of roadside streetlighting (learn more about our streetlighting services here). Further to this, each traffic intersection we install typically has it’s associated lighting component. So how many of these install’s are using LED streetlights and what are the measurable benefits in terms of costs and efficiency?

A Short History of LED Streetlights

Well before we dig deeper into this, lets take a look at where it all started.The first practical LED was created in the early 1960’s by a man named Nick Holonyak. At this time, the technology was still a long way from commercial applications due to the expensive nature of manufacturing. The 1970’s saw LED’s being used in various electrical circuitry and in items such as watches. It wasn’t until the 1980’s that the LED made a debut into the traffic industry.  This was during a time when LED streetlights were still under scrutiny by the various regulatory bodies and institutions. Not everyone agreed on the available color spectrum or the general lighting dynamics that LED’s offered. The technology had just not yet proven itself.

LED Streetlights have since become common practice and are more widely accepted as the norm. They have also grown to include a multitude of customizable options that can conform to the specific needs and/or requirements of a particular project. Fast forward to 2020, and the majority of all Can-Traffic Streetlighting projects involved the use of LED’s. 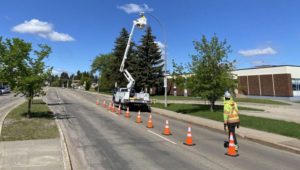 Photo by the City of Edmonton of Can-Traffic Services installing LED streetlights within the City.

On June 4th, 2020 the City of Edmonton wrote an article, linked here, that illuminates some very interesting facts about LED use and the associated benefits. The article mentions that in the City of Edmonton alone, the use of LED streetlighting will save the city upwards of $1.2 million dollars per year! This essentially is $1.2 million that can now be spent improving our children’s education systems, parks, and so on. Further to this the City estimates a reduction in greenhouse gas emissions by 5500 tons per year. These are no small numbers!

Colwyn Kelly, President of Can-Traffic added that ‘by combining LED technology with the new smart traffic technologies one could yield a whole new world of possibilities’.  Over the course of the next three years, the City plans to convert another 46,000 streetlights of its 110,000 over to LED.

The City of Edmonton has an extensive history of pioneering new technologies in the traffic industry. They were one of the first in the nation to explore the use of connected vehicle technologies, autonomous bus technology and have been a huge contributor to the continued use of LED’s. Can-Traffic Services has been there to help support the City in these initiatives and will continue to do so well into the future. Our unified support and the support of people like yourselves is what makes advancements such as these possible! So, are LED streetlights actually taking over the market? In short, YES. Most all of the newly acquired contracts for lighting currently include the use of LED’s. Additionally, many past projects, like the ones within the City of Edmonton, are being revisited with retrofit LED luminaires. The benefits of LED to both the owner and the environment far exceed their predecessors. Based on our numbers, LED lights are sure to see continued growth and use as we look towards the future.