After a considerable amount of effort, the students at the Homesteader Elementary School on the Northside of Edmonton recently achieved an unprecedented victory with the City of Edmonton. Letters from the students were written to Councilman Aaron Paquette of Ward 4 requesting a crosswalk be built at a crossing adjacent the school. The students felt the crossing to be considerably unsafe. CTV covered the story in their digital journal dated November 14, 2019. 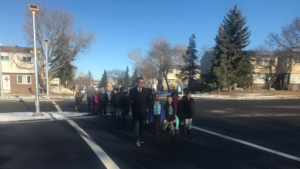 As fate would have it, Can-Traffic Services was selected as the company to complete the project. Since the founding of the company in 1978, it’s core purpose has been to safely guide family’s home. The completion of this crosswalk embodies this very value. Upon hearing the story of how the crosswalk became approved, the President of Can-Traffic, Colwyn Kelly personally reached out to the teachers, principal and students of the school to find out more about their inspirational story.  As it turns out, what prompted the initiative according to Principal Andrea Cooper, was ‘the amount of speeders and close calls’. Colwyn then invited the students to come speak at the Can-Traffic head office located in Sherwood Park and share their story with all the company. The students accepted the invitation and are scheduled to speak this Monday, January 13th.

Believing that Can-Traffic makes a difference in the community between co-workers and staff is a far cry from hearing it directly from the public. Can-Traffic Services would like to personally thank all the students and staff of the Homesteader Elementary School for all their efforts and sincerely hope that the installation of this crosswalk has made the journey to and from school safer for everyone. Can-Traffic also looks forward to hearing all the stories of how this became possible and the difference the crosswalk has made for the students when they speak this Monday.

As a token of Can-Traffics appreciation for the students efforts,  hockey tickets were donated to the school to see the Edmonton Oilers play at Rogers Place. Colwyn asked that the tickets be given by the school to one of the students who played a key role in the initiative . After speaking with Principal Cooper, she had said that the tickets were given to a student who had never before attended an Edmonton Oilers game. Can-Traffic has always believed that  people are best served by being “a voice and not an echo” and the students at the Homesteader School are a shining example of this, including the rewards it can bring. Bringing in the new year this way has brought a smile to all the faces at Can-Traffic, and as a company, we look forward to the opportunity to again serve our community.