As traffic volumes rise so to do the amount of incidents/accidents and the traffic violations associated with this increase. This has recently prompted authorities to re-evaluate control measures in place and consider new options to help mitigate these increases. One of these new technologies, specifically used to reduce the number of speeders on a given segment of roadway, are known as point to point cameras, or average speed cameras. So, what exactly are they? 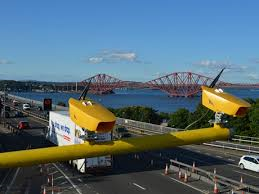 a camera at the start of any particular segment of roadway with a high incidence of speeders and another camera where the zone ends.  As vehicles enter the average speed zone, your licence plate, and the time you entered the zone gets recorded. The same happens when you leave the zone. The total distance traveled is then divided by the time it took to navigate the zone resulting in an “average speed”. If your average speed is greater than the maximum allowable limit, a ticket is then issued. 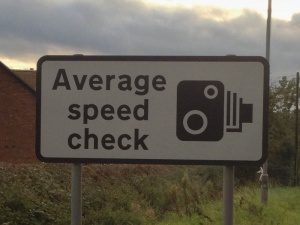 Unlike photo radar, these systems are highly visible and the motorist is well aware when entering an average speed zone.  For photo radar to be effective, they are often found in places where motorists are unable to detect them until the last minute. Once seen, many motorists are then then tempted to slam on their brakes to avoid detection thus creating a dangerous situation for drivers behind. Once the motorist passes the photo radar, the threat is gone and the motorist can then resume speeding. This system is quite contrary to the methodology behind average speed cameras. The cameras are not hidden, they are in plain sight. There is no need to slam on your brakes. If you enter an average speed zone at a slightly higher speed, or you need to overtake a slower vehicle, these increases are averaged over the entire zone.

Simply put, because they work. A better question to ask is, are the authorities willing to reduce the income that photo radar provides in order to employ a system that does not see as much revenue but dramatically reduces the incidence of speeders and thus casualties? Since 2005, Scotland has been using point to point systems on roadways prone to speeding and collecting data on the effect this system has had on the rate of incidents, casualties, journey time and speed limit compliance. To help asses this data the A9 Safety Group was created. In January of 2018 they released a report known as the A9 Data Monitoring and Analysis Report. The report contained detailed information on vehicle volume and speed data but most notable were the statistics contained within the casualty analysis. The report utilizes 35 months of data from various locations utilizing average speed cameras to compile the following stats;

With statistics such as these reinforcing the efficacy of average speed cameras, it is hard to understand why we still employ the use of photo radar, other than the obvious monetary benefit.  Should we ever adopt this system of speed control in Canada and you find yourself in the presence of the notorious “Yellow Vultures” as the British like to call them, ask yourself this question. Would I rather receive a ticket in the mail for an offence that I was not aware I had committed wherein the enforcement of this system had little to no effect on driver behaviour at the time, or, would I rather pay a ticket for which I was fully aware I was going to get and the enforcement of this system had a notable, and positive effect, on the driver behaviour around me at the time?  When one considers the environment we wish our children to be driving in, the choice becomes less about money and more about saving lives. For more topics like this one click here.